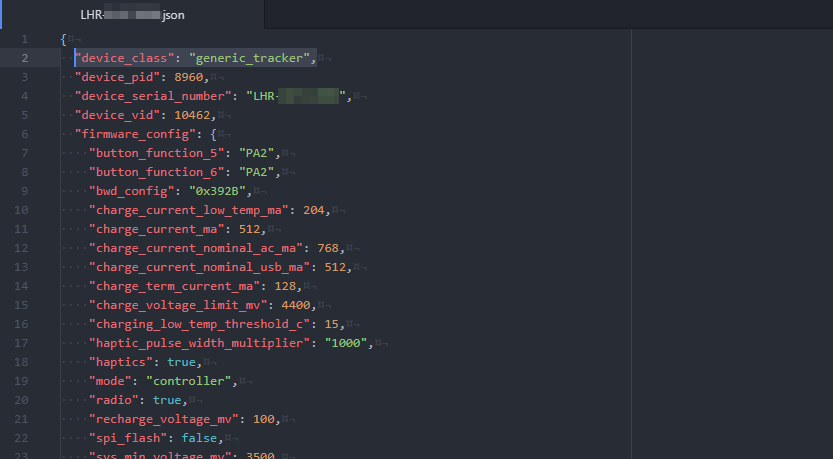 Update 2/20/2020: I “decompiled” the Vive Tracker Role Changer tool and figured out it’s just self-extracting batch file packaged with lighthouse_console. Will try to get in touch with Valve or HTC to see if there’s a more direct way of getting configuration data.

I recently picked up a used 2018 VIVE Tracker from Amazon so I could start building a full-body tracking kit over the next few months. The kit was relatively complete: I received the original box, manual, warranty information, etc. I was only missing a USB micro data cable, and those aren’t exactly hard to come by. All in all, everything was in fairly good condition, other than a scuff on the plastic and the faint scent of cheap perfume. It paired with SteamVR just fine (albeit with a VIVE controller icon), so I ziptied it to an old belt and jumped into VRChat. Things quickly went downhill from there.

It would work fine for a bit, but then I would be unable to move (this ended up being an unrelated problem), so I would turn off an Index controller, and would find my character’s hand firmly attached to my groin and one controller would be unusable. Restarting both controllers would only make the situation worse.

I was flabbergasted, and hours of Googling and reading through ancient reddit threads resulted in multiple attempts at fixing the problem, all to no avail. Finally, I found someone with a similar situation, and was able to solve the problem, with a few tweaks.

Here’s what I experienced in my situation (will make searching for this problem easier, lol SEO):

A while ago, there were a few games that wouldn’t work with trackers because they only were designed to work with actual controllers. A workaround was to use a now-defunct utility called the Vive Tracker Role Changer to change the firmware of the tracker so that it told the computer that it was a controller rather than a tracker. The steps below effectively reverse the effects of this tool. I have a suspicion that there are more values that were changed, but I’d need a stock, un-fucked-with tracker to verify this.

WARNING: This solution will involve screwing with files stored in the firmware of your device. You will likely void your warranty, and carry the risk of bricking your VIVE tracker by following these instructions. Proceed at your own risk.

The following set of instructions are based on a post on reddit by iEatAssVR. Kudos to them for doing the legwork. This just expands on some things that were glossed over.

You should now be all set!

I plan to make an automatic tool to perform the same actions at some point in the future. If the creator of the Vive Tracker Role Changer tool would get in touch, I would be grateful. “Decompiled”, it ended up just being a batch file in a self-extracting executable that does the above procedure.